Notice: Trying to get property 'session_id' of non-object in /home/kimmorris/domains/kimberleymorrison.co.uk/public_html/wp-content/plugins/ninja-forms-legacy/deprecated/classes/session.php on line 122

Notice: Trying to get property 'session_id' of non-object in /home/kimmorris/domains/kimberleymorrison.co.uk/public_html/wp-content/plugins/ninja-forms-legacy/deprecated/classes/session.php on line 123 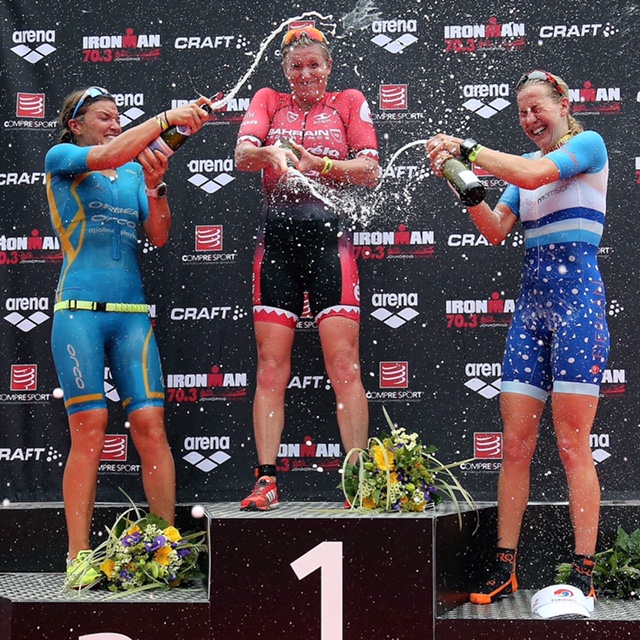 The new triathlon season has arrived.. points, as of last weekend in Sweden, are now being collected for the 2017 World Championships. I am so proud to announce that I was selected for the 2016 Ironman70.3 World Championships.. however I feel more confident to stick with our goal of gaining experience this year and lining up against the best in the World next year. Plus Australia is a long way to go!

Friday morning the alarm set for the very familiar time of 4.30am and Mum, Dad, Ben and I were off to board our Ryanair flight to Sweden. We chose to visit the beautiful people of Sweden because we have never been and wanted to get a glimpse of the lush countryside and felt the course would suit my bike legs very well with approximately 800m of climbing (minimal climbing for a 90km course).

We were greeted by our lovely large Swedish people carrier that comfortably fitted the family plus the bike and spare wheel bag. Dad got so excited he was going to sell his vehicle and buy one for home! However they don’t do the 4 wheel drive version in the UK, phew.. The car was hideous to look at, but it did the job!

After Ben navigates us the incorrect way.. even though his wife and the road signs suggested we stay on the motorway heading East Dad followed Bens instructions.. 20minutes later back, Oh wait I’ve seen that Graffiti before, yep we had done a detour loop! Ben usually gets our navigating spot on!

We arrived at our hotel just in time for the Pro race brief and from that moment on logistically the race couldn’t of been simpler. We were 200m from the Swim, surrounded by the inner city run route and just out of the door was the bike course. The atmosphere and organisation was First Class.. I can only imagine it compares to First Class treatment on an Emirates flight.. beautiful presentation, no detail left untouched, calm and welcoming atmosphere and stunning people.

If you like a beer (or two) like Ben it is a pricey town and if you enjoy eating as much as we do, it’s a pricey town but well worth it for the beautiful scenery and the stunning lake setting. 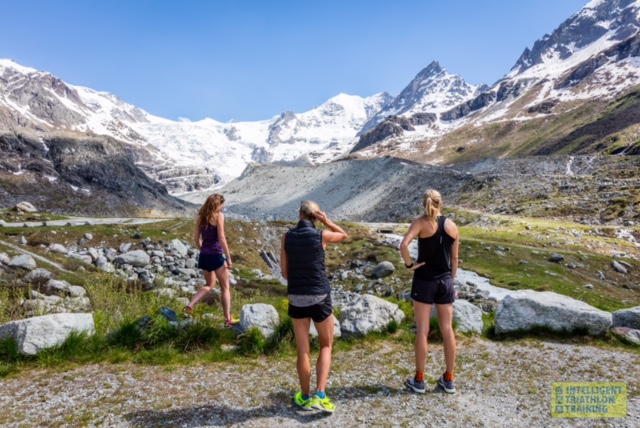 Mark and I sat down and looked at my season so far following my podium success at Ironman70.3 Staffordshire and both bounced ideas off to see where we wanted the second half of the season to go. There was an obvious two options..

As tempted as I was to say lets run quicker.. I knew that it would be easier to gain a minute in the swim than it would on the run. I had a block of swimming coming up with Ness and Kirsty in Switzerland and I knew they would push me to quicker swim splits. Plus the extra run focus would perhaps hurt my bike legs.. not a risk we wanted to take mid season.

So it was off to the Swiss Mountains curtesy of Elo and her wonderful parents with Coach Mark and a fantastic group of girls. Training felt challenging and I had to dig deep on many occasions to keep my focus and hit the key swim sessions but the hurt was well worth it. 4/5 seconds dropped off my 100m splits over the camp and I was swimming with confidence and a smile. Biking was fantastic, lots of climbing and some TT work in the valley. Running was ticking over nicely.. no increased mileage just keeping the running frequent up at altitude.

I arrived home 10days prior to the race in Sweden and I was ready to put my feet up and relax. Oh no, after some vino and a great final night in Switzerland Mark was busy typing away into my training peaks. We kept some intensity and volume back at home and began to back off just a handful of days prior to the race (we have found I do race better this way). 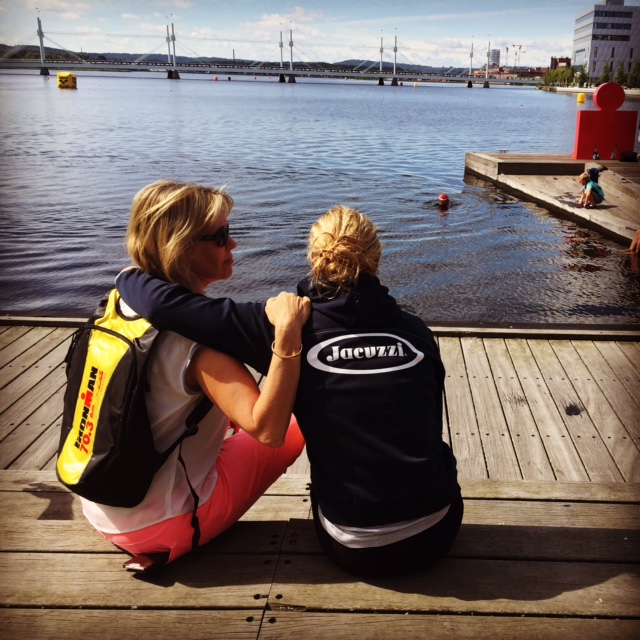 I had a bike session just to remind the legs what we were about to enjoy on Sunday.. the speeds were awesome 45kmph + out on the course.. I did let Mark know it would be a sub 2.18 (sorry 4minutes off!) following the work on the bike I had a little look at the run course and race pace efforts felt OK. The swim was a nice and simple out and back in a rowing lake so no sighting really required, just follow the lane ropes, thanks Ben! 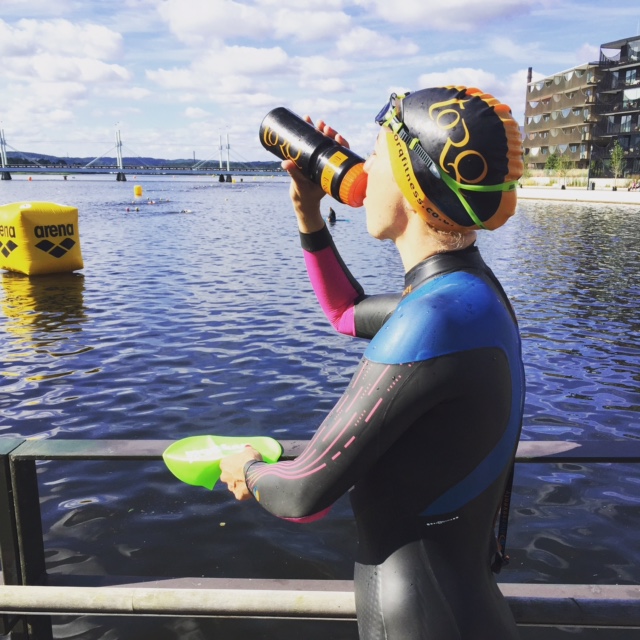 This was exciting.. turn off the bike power (not literally) but the numbers on the screen were time and distance only, very old fashioned. I was going into this bike on feel.. no holding back just one aim for me, like always, get to the front of the race because it’s an awesome place to be!

The pro women went off 1minute behind the men and when the horn sounded I noticed Emma Bilham on my left. I breathe to my left and I know Emma can swim a consistent split so her wake was my focus. I was swimming with a smile knowing that we had only let one swimmer get away and that was a previous World Champion and renowned fantastically consistent swimmer Jodie Swallow. As we exited the water as a group of three chasing Ben let me know the time gap to the front was 2minutes.

The long run to transition was very atmospheric, lined beautifully through the streets with blue carpet.

Onto the bike and I knew at the 30km mark there was an out and back section so I could take my own time split to the front of the race. I biked my socks off and I knew I would need to produce something stunning to gain time on a consistently strong all round athlete that is Jodie. By 30km the gap was closing to the front and I cycled away from the race behind..

My family were waiting at 50km so I had no time to waste, I had so much desire to get to the front by that point. As if by magic there I was on Jodie’s tail when we emerged at the 50km mark! The 40km that followed were character building and I arrived into T2 alongside Jodie at the front of the race. 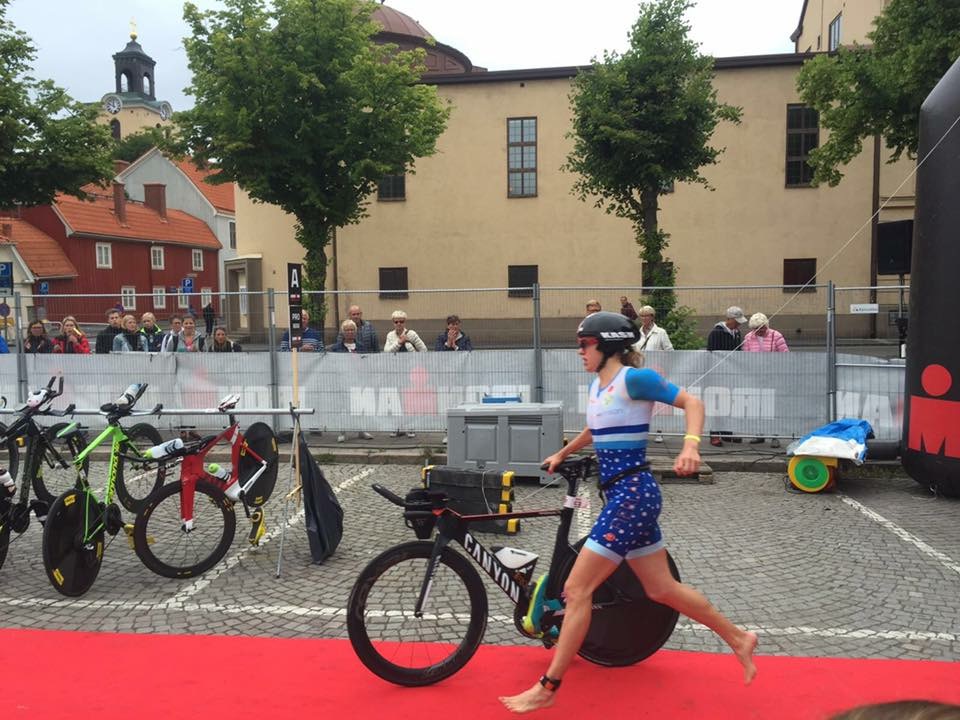 A quick extra breath in transition and I was out onto the run 10seconds behind. In reality I knew I wasn’t running for the win, I was running at a pace that would get me to the finish line as fast as possible (thank you for reminding me Mark). Sustaining sub 4min per km pace to keep Jodie in my sights is too ambitious at the moment. In check with target pace to hit my best run form to date, I was running happy. The atmosphere was electric and the running legs were lifted over the 21.1km 2.5 loop course. 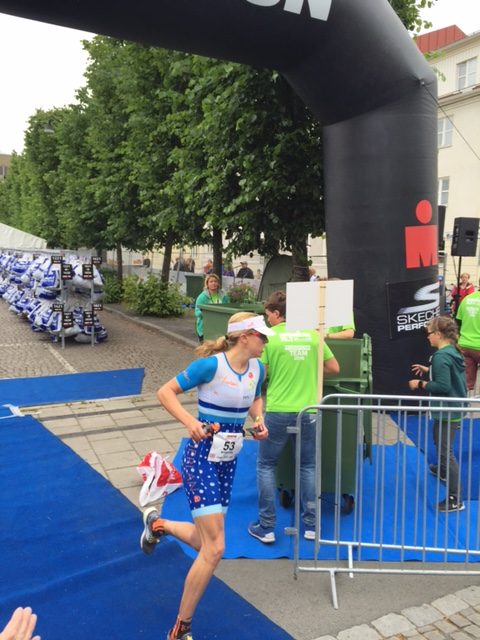 Aså (the newly crowned Swedish middle distance champion) was closing the gap and my pace was not lifting to the pressure. As I was passed in the closing stages of the race I had mixed emotions.. my run form was excellent for me today what else could I do..? I dug deep and gave the final few minutes all I had without losing my vision to stay upright. Aså was so close yet so far from me.. I arrived at the finishers chute full of atmosphere and beauty and Aså had fallen to the floor over the line. This was my opportunity to now celebrate the podium spot I had achieved so I gave Ben a big hug and enjoyed the hand touching all the way to the finish line.. I had hand on heart raced to the best of my ability and couldn’t hold back the tears standing proud on a World Class podium. 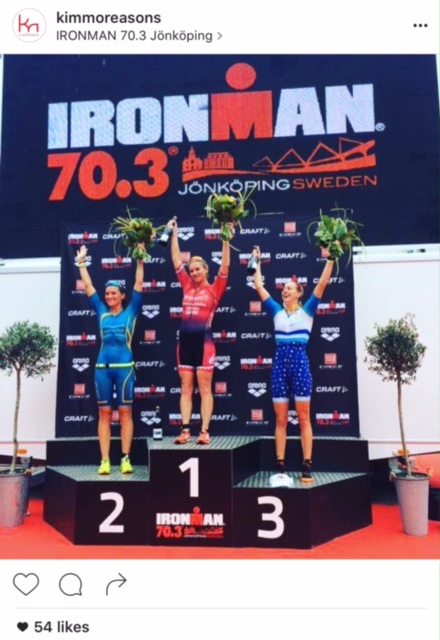 I am now back home working hard to sharpen the pencil ahead of my most exciting race to date.. The Ironman70.3 European Championships in Wiesbaden, Germany on the 14th August. First stop The London Triathlon on the 7th August to work on some speed..

The continued encouragement and kind words is absolutely amazing and I am so very grateful, so thank you for taking the time to share my journey as a Professional. 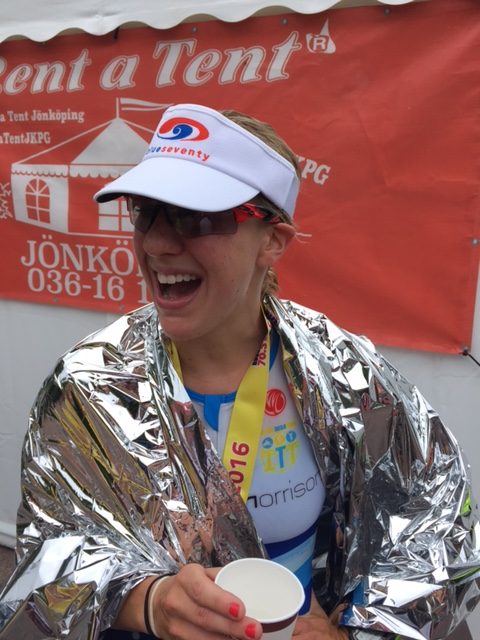 Torq is my race nutrition of choice and I am so grateful they are now onboard to help keep those gels topped up and my lovely night time hot chocolates.

Blueseventy has been my only wetsuit of choice since taking part in my first open water triathlon in 2012. If I have any advice chose a size smaller than your measurements.. Squeeze in an enjoy the comfort and speed in the water.

Jacuzzi is the “icing on the cake” I am privileged to experience the ‘Art of Recovery’ day in day out, thank you.

If you would like to be part of my continued ambitions for 2017 please do get in touch, all support is gratefully received and helps me achieve thank you.