Wonderful, exciting and precious annual trips with our family… But this time Tom and I (my older brother) decide to include Challenge Phuket Triathlon. For Tom this was his first one.. for me I was finishing my 2015 race season so yes of course rivalry!

Tom entered to race before we had even considered flights, accommodation and time off work! So I guess as a family we had no choice, we were off to Thailand for a family gathering just before Christmas and how glad I am Tom took that step..

Tom is an inspirational brother.. He will give absolutely everything (and more) to the extreme of stretching his arms to not give ‘Macca’ (World Champion Triathlete) much room on the beach start line! 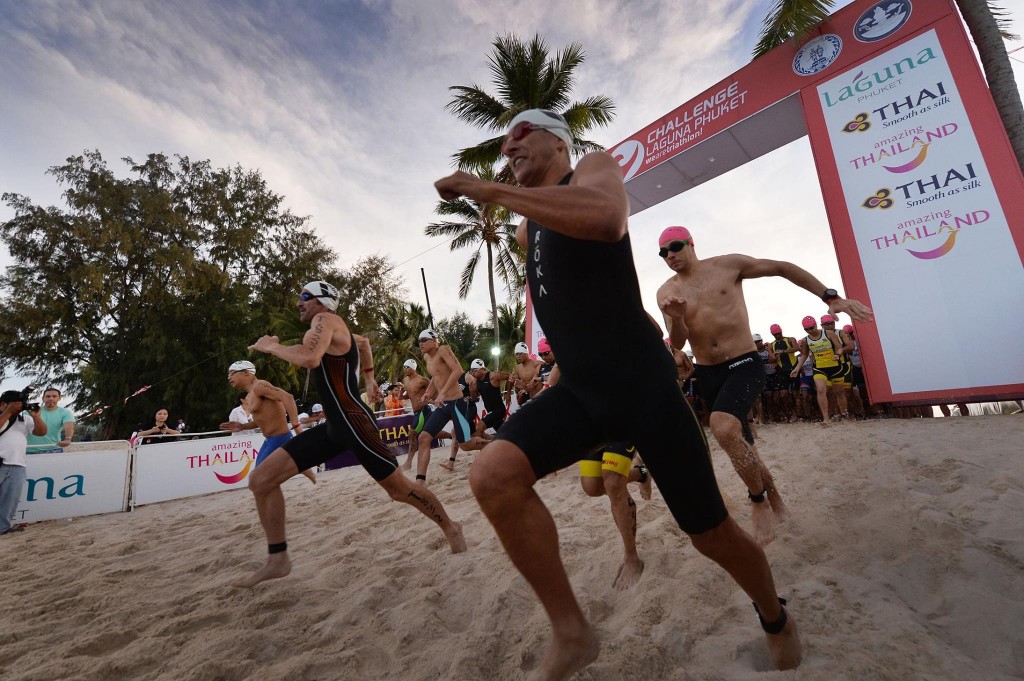 Chris McCormack may have had slightly quicker reactions to the horn, Tom in the shorts just a stride behind.

Chris was ‘going in like a bullet’ so he was chatting on the start line.. I knew Tom was planning to ‘swim like an Animal!’ This was going to be awesome..

Meanwhile I had already lined up at 6.31am with a fine selection of World Champions beside me. I like to introduce myself to athletes that I have admired and followed.. they don’t share the same excitement unfortunately, perhaps one day! 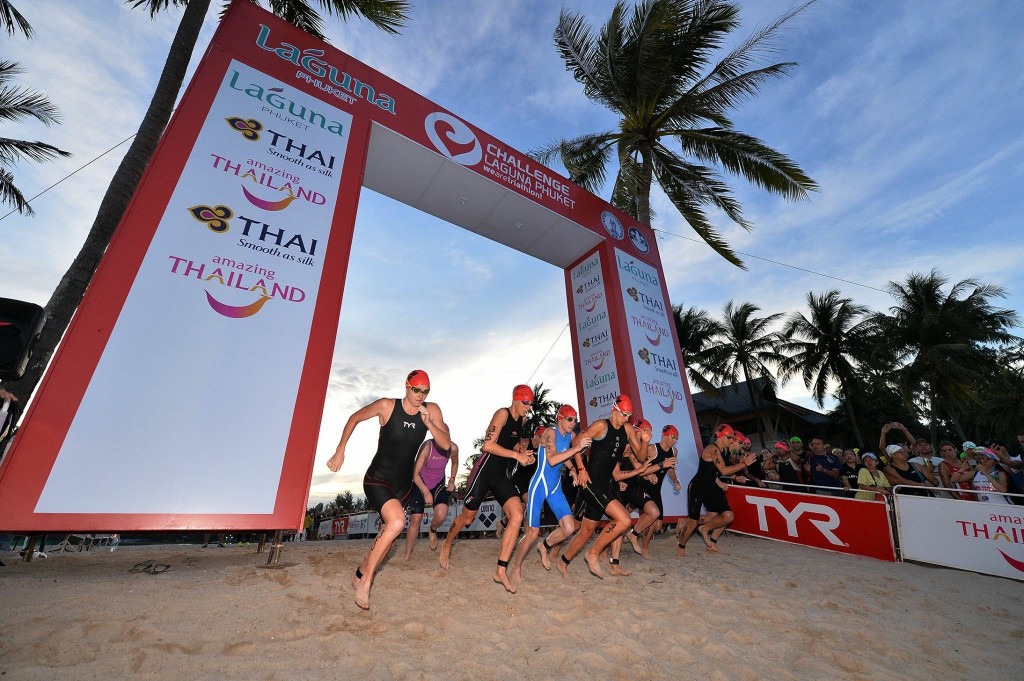 Horn sounds and it’s a sprint to the water.. I had a clean entry and swam with the pack who had quickly lost touch of Jodie Swallow (IM70.3 World Champion). We swam in the sea for the majority of the swim and then exited it to enter the lagoon which took us into T1.. 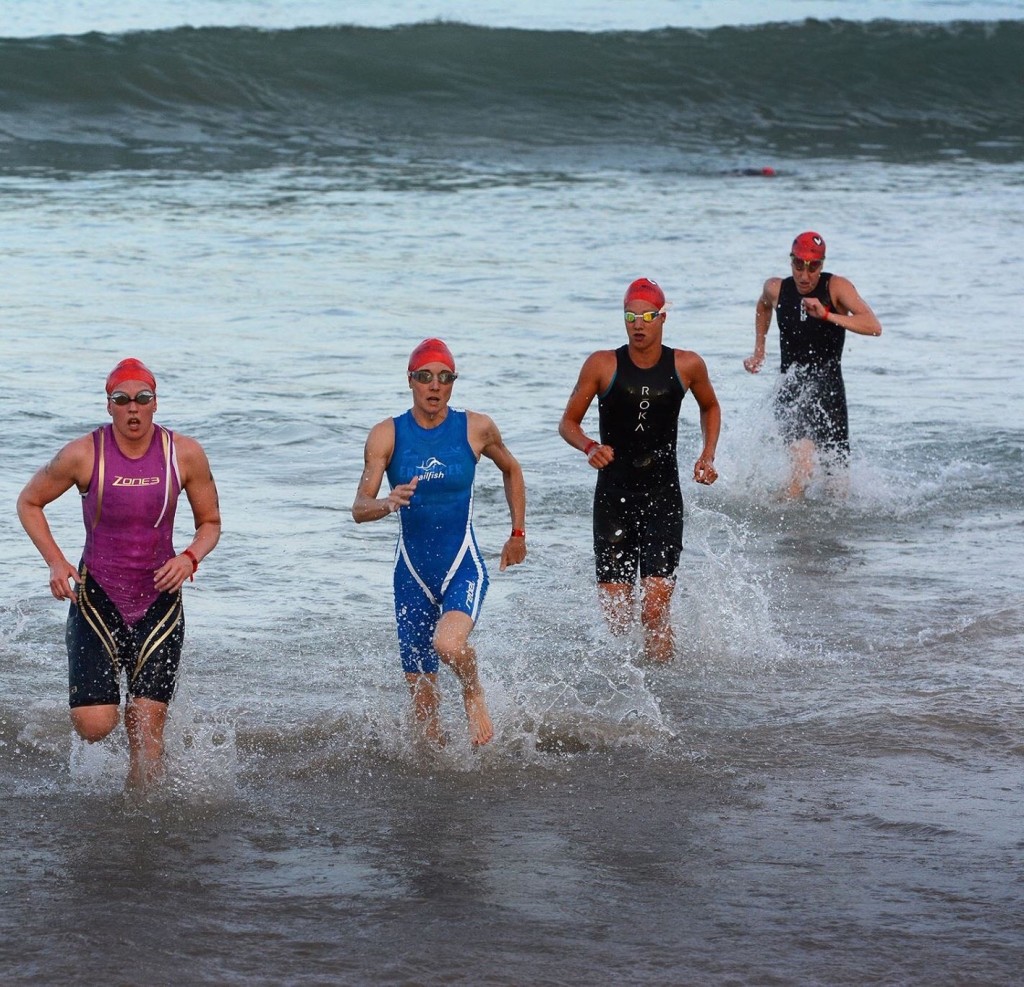 The lagoon water was not so buoyant as the sea and I struggled to keep the feet of the pack ahead.. I sank like a sleepy seal. I exited the lagoon solo and heard Dad shout so enthuasitaclly “you are right there with them!” I smiled. Dad could finally see that my swim ability can and did put me towards the front end of the race. Onto the bike where I was determined to get in and amongst the leaders and work hard, very hard on familiar roads that Ben, Tom and I spent some time on. 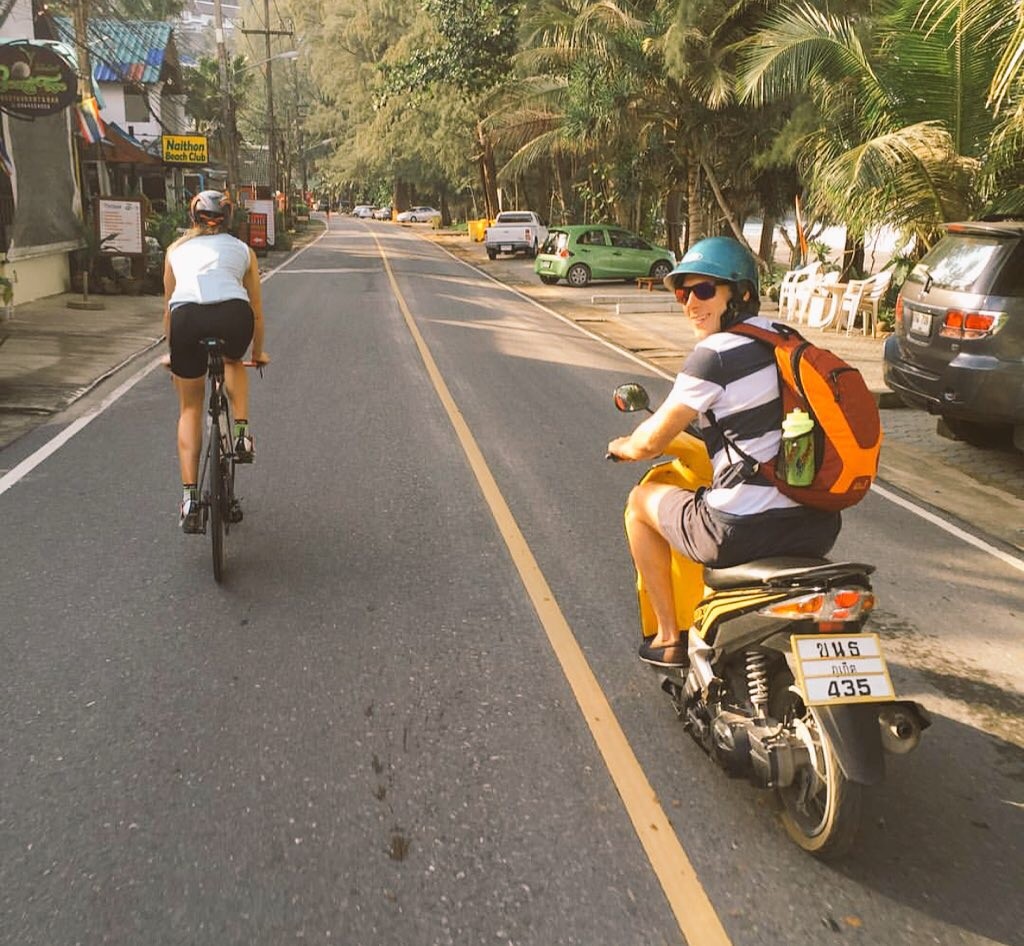 Tom meanwhile was having an awesome swim exiting the water with his arm firmly raised in the air with one finger up (signalling he was in the lead of his wave!) Tom even took the time to look back at the other swimmers, have a drink and enjoy the sprinkle shower!

I was with great company seeing Simone (the eventual race winner), Radka and Emma just up the road on the bike. I have trained with Emma in the past and it’s always good to show your face! At the 20km mark it all went quite literally ‘pear shaped’ a little lumpy bumpy ‘outdent’ in the bike route.. but I kept my head down, kept my focus and rode to my plan keeping the nutrition in check.

There are two sections on the course with 20%+ gradient climbs. These climbs felt absolutely torturous.. I am so pleased my chain didn’t snap as my momentum was terrible! I am also so pleased these were a minimal part of what was a fast, flat bike course on very descent roads.

Tom was cycling really well coming in around the 3hour mark for 90km, waving as he entered T2 but no longer waving the one finger. Tom was then retiring from the race (he had a stress fracture just 8weeks out). 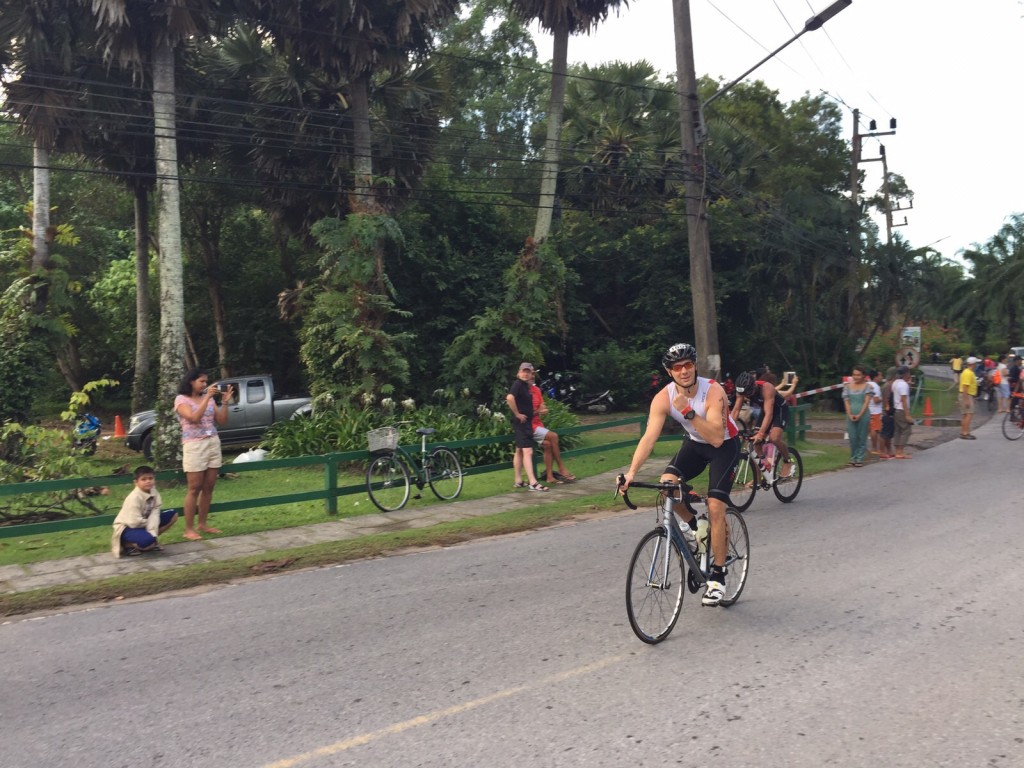 I came into T2 unaware of my position in the race (I had lost time on the bike, I found it extremely tough) but I was fuelled by remembering all the preparations I had done to run strong in the heat. First aid station 100m from T2 so I filled my cap with ice and got the legs moving. Just 1200m down the road another aid station as this continued every 1.5km untill the finish line. My running pace was OK given the scorching conditions however the temptations to ‘ice up’ at every opportunity must have cost me, whoops! I did run with a smile and absolutely loved the atmosphere, I would have to admit that I was running to finish my 2016 race season and that felt electric, it’s been a busy and exciting year!

I finished 8th Female Pro in a time of 4h56m28. Great experience and I cannot wait to push on again next year. 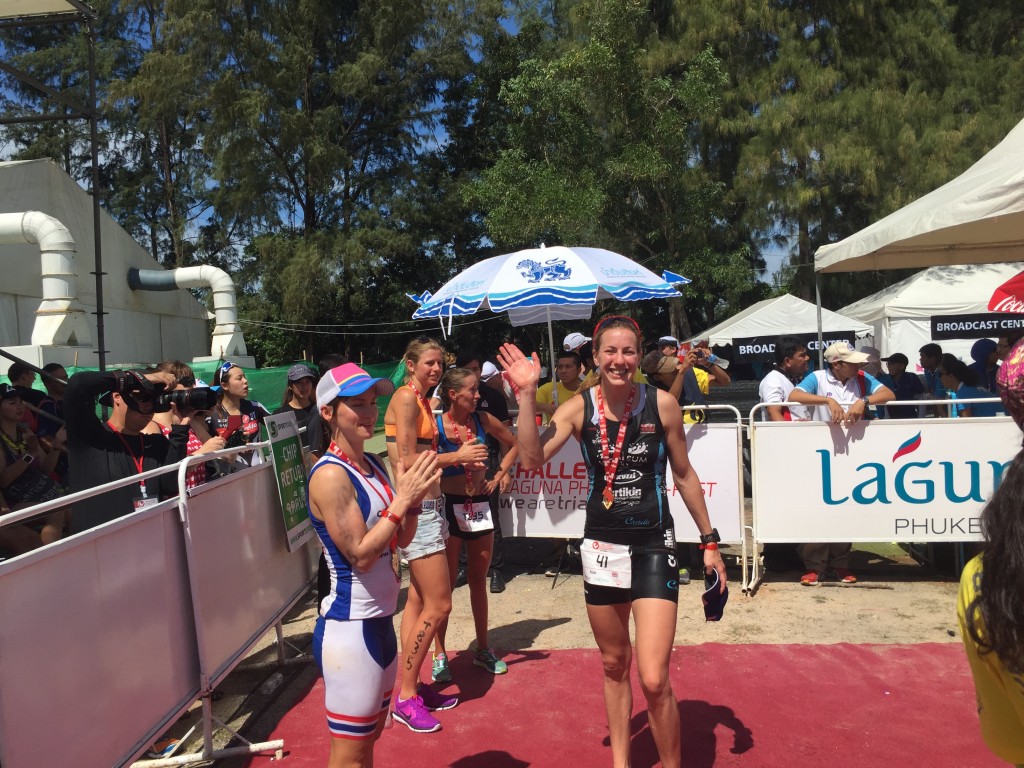 Up on stage alongside an inspiring group of female triathletes I was happy. Our competitors drive, challenge and reward us and I was privileged to be standing beside them always determined to move further up! 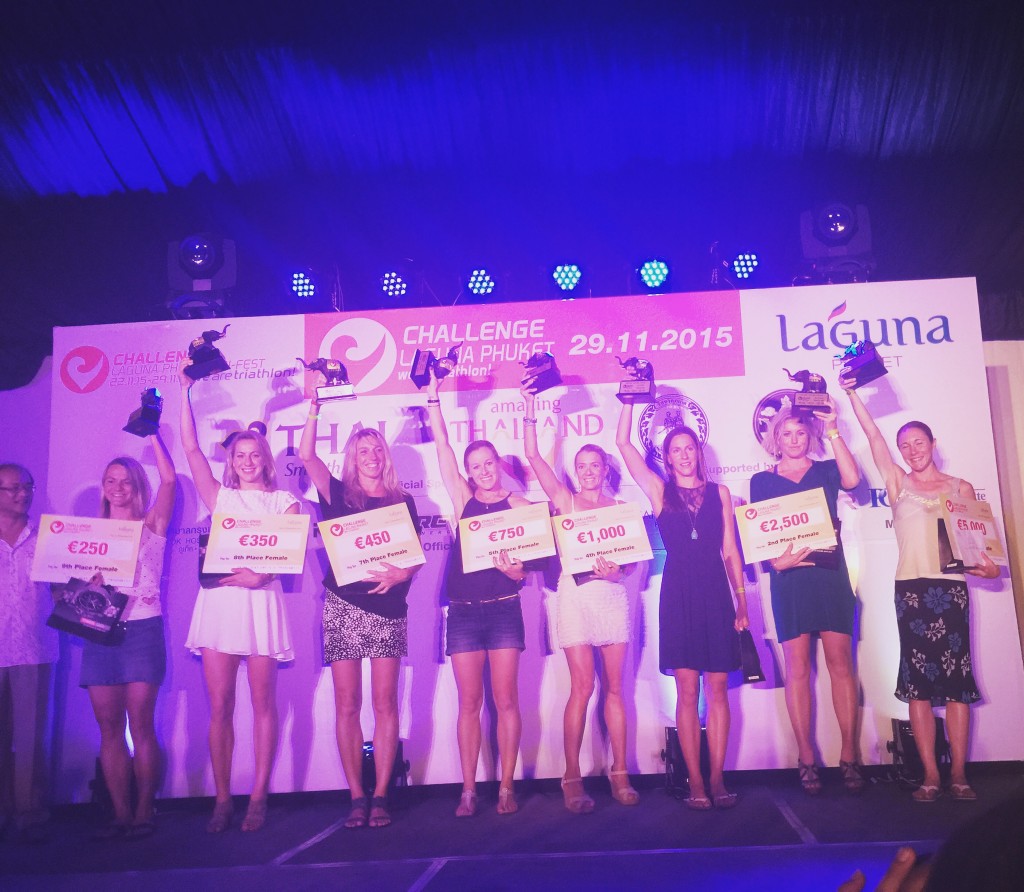 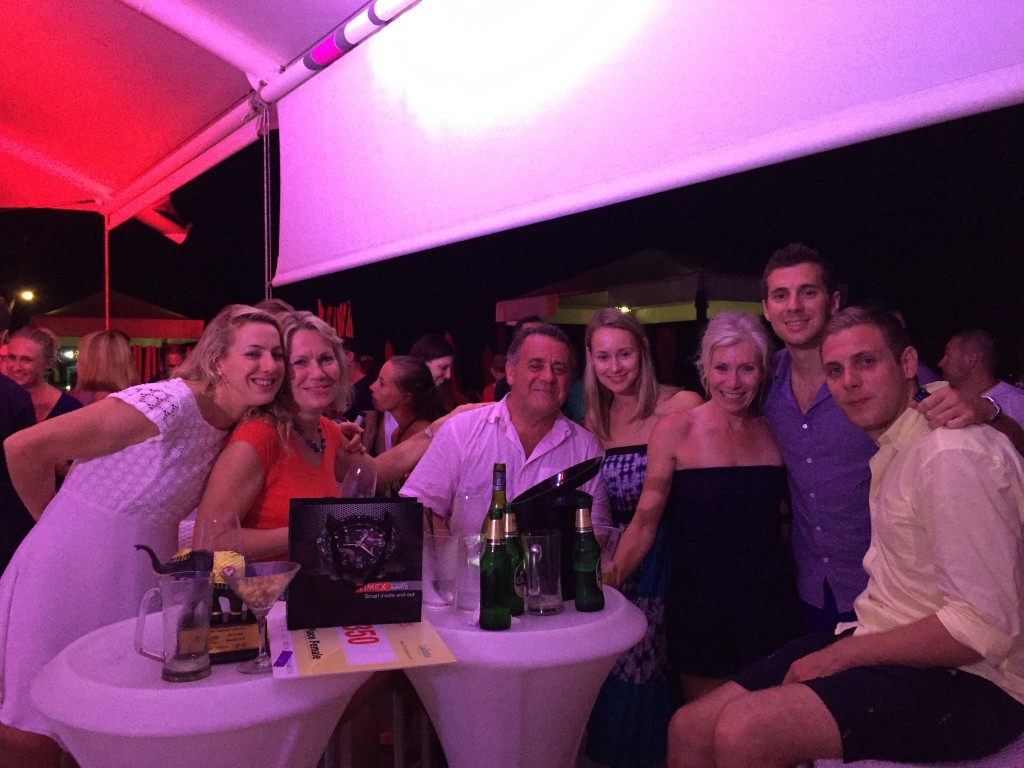 Thank you Wensum Pools for continually providing me with more than a ‘backbone’ to my daily ambitions in the sport of triathlon.

Jacuzzi thank you for keeping the wheels moving smoothly on my Bicycles, the support you provide is invaluable.

Certikin have made it possible for me to travel and race in fabulous locations this year to gain experience and develop in the triathlon world, thank you.

Auction House UK have kindly come onboard this season and I am so grateful for the partnership moving into 2016.

Fierlan Cycling is women specific for cycling attire and I would be wearing the kit sponsored or not, so thank you for the kind support Fierlan!