I have been suffering from a painful bug from River Dee so thank you to Ben for giving a really good account of the race to his best friend in an email. Yes I have plagiarised, enjoy…

We had a lovely weekend up in Chester. Kim did amazing. She got a PB but missed out on qualification by one place. The weather was perfect however she got herself stuck right on the outside and got elbowed in the face dislodging one side of her goggles. 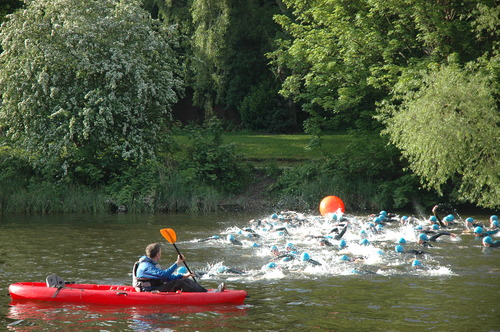 She seemed to be going backwards for the first 200m and lost a lot of time. However when she got back she had caught up some of the other swimmers and came out of the water 20th female but she had lost 5 minutes on the leaders and she was at least 2 or more minutes off her usual pace. Tom (my brother who had flown in from Hong Kong) and I then ran 800m to try and catch a glimpse of her on the bike as she crossed this lovely bridge out of the city. We managed to get there in time (seconds to spare) but Syd and Andrea (Mum and Dad) were too slow haha.

We then went and got our bacon sandwiches (and egg and sausage haha). We then went to the entrance of the second transition to count the people ahead of her so Kim could try and catch people if she needed. Kim was 8th in her age group coming in off the bike but she had had a great bike time. We then went and waiting for Kim to run past us after the first lap of the 10km. She had moved up two places in to 6th. She then came running past at the end but someone had passed so she ended up 7th. Great effort just needed to be 2 minutes quicker. A better swim and she would have been 5th and qualified. However when the results came out the girl in 4th or 5th had been penalised 2minutes for drafting (using someone else to create a draft i.e make it easier to cycle and be able to go faster) so she dropped to 7th and kim moved up to 6th.

This meant that Kim was only one place off qualifier and 52seconds behind!! Hopefully she will do it in the next one. 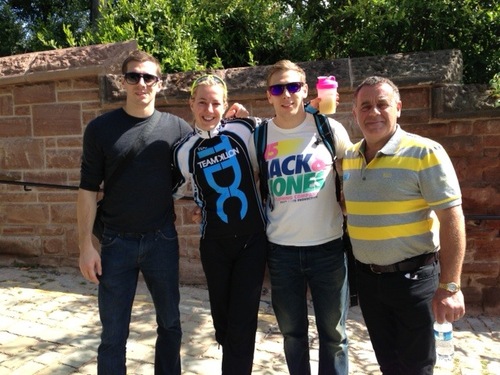