I am delighted with my first race of 2017. So so rewarding finding out my bike legs could push me into the bike record books against World Class competition so early in the season and bike within 5minutes of Javier Gomez.. But triathlon is a swim, bike and run race and my highlight was the run off the back of a hard bike..

In August 2016 I had quite simply pushed too hard and picked up a stress fracture in my second metatarsal (right foot). It had got to the point in the season where I think it’s fair to say I thought I could cope with “hero” run sessions. We did some fast run sessions on the treadmill and track and we felt run speed was the limiting factor at this stage. Mark (my coach) and I were very patient when the MRI showed trouble and took a full 10 1/2 weeks off running. We built up very gradually and slowly and we were in no rush for IM703 Dubai. Our focus is still firmly set on going back to get my title at IM703 Buenos Aires in March.

Alongside the stress fracture recovery, I teamed up with Emma Patel from North Norfolk Nutrition to become a lighter, but stronger athlete. Over a period of 12weeks with the majority of that time off running we could carefully drop some KGs slowly keeping a close eye on what the impact was on the bike (all part of our longer term goal to run faster off the bike).

January arrives and our run mileage is up to 18km (just over 3km off race distance) and we have three tempo sessions in the legs.

Post Christmas and I managed to stay disciplined and kept those 4KGs off that I raced with in 2016.

Standing on the start line of IM703 Dubai I was ready for a Race. I was aware we were testing watts per kilo and the run distance was going to feel long… But no excuses you stand on a start line ready to Race!

4.30am start with our alarm sounding and Ben popping the music on (still our Buenos Aires playlist from March 2016). Egg and avocado rolls at the ready and we were off to transition for opening. A very calm and dark start at this hour in Dubai, the transition area was floodlit and there was a nice busy, friendly, organised atmosphere. All pre-race checks done and I gathered myself by the swim start and gave Mum, Dad and Ben and big kiss before I was off for a good warm up to get the heart rate pumping.

7.03am and the Women’s Pro wave was off! A busy and narrow start to the swim with approximately 25 of us in the water. I settled into a small group noticing I had Emma Bilham for company who I swam with in Sweden last year. We exited the water in a group of 4 and Ben told me I was 1minute 30 off the pack. not sure what this meant, I was only interested in the front of the race.. 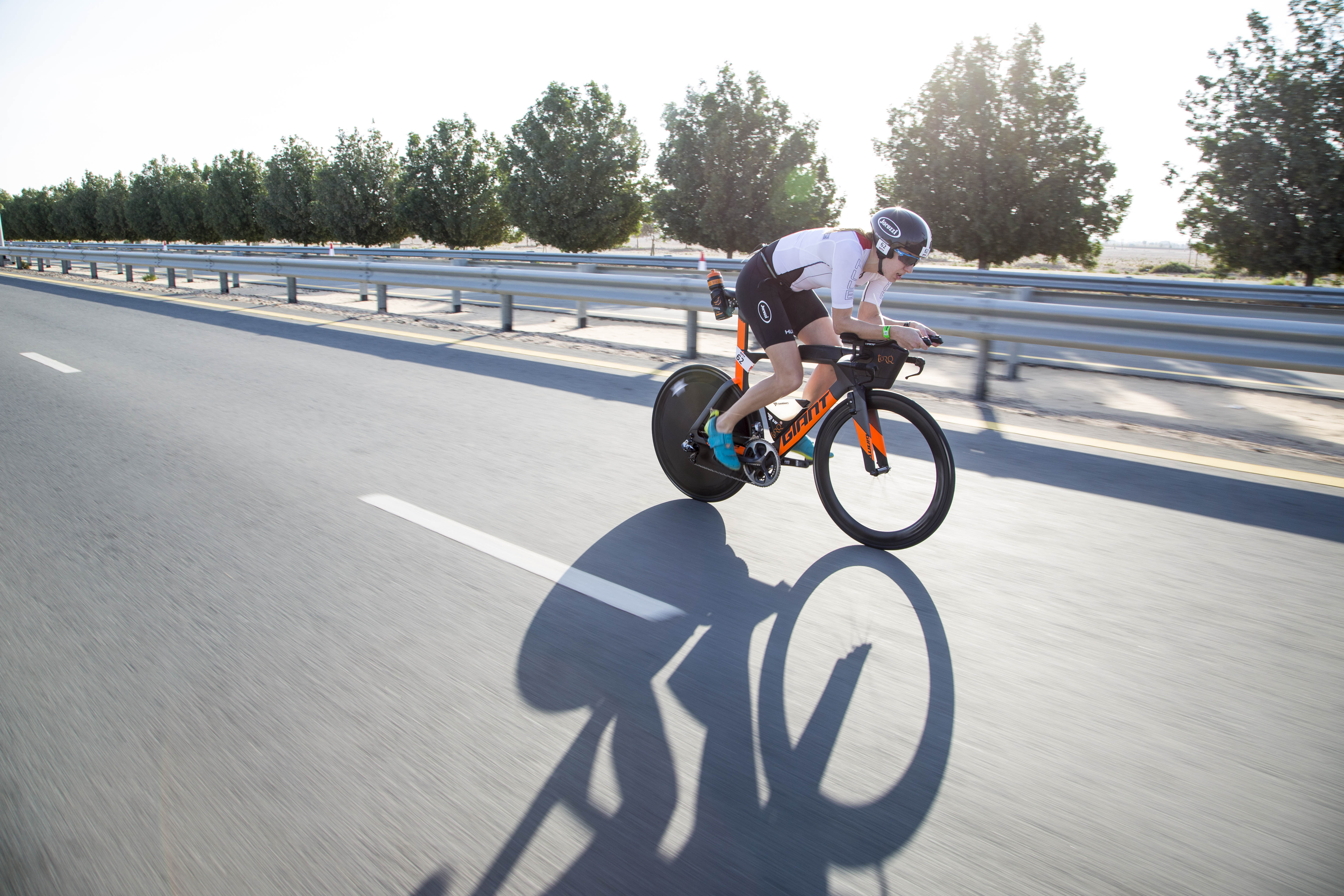 It was approaching 7.45am on my run watch and I had settled on the bike with only one focus – how far ahead are the leaders? I race with my bike Garmin under the seat post as I am happy racing to feel. I was moving through the field nicely but I still couldn’t see that Red Bull helmet! The family were watching back at the finish line on a big screen and the only way they would know if I was OK was if I got to the front of the race so I kept moving myself through the field. I hit the 10km marker and began to pass some of the men’s field.

8.00 approached and I had a TORQ energy gel and a sip of drink and kept my head down and the pedals turning. I noticed some camera bikes in the distance with two cyclists and I knew I hadn’t seen Daniela or Ellie Salthouse yet. They appeared to be getting closer and closer so my motivation grew and grew.

I arrived! The front of the race with the camera zooming in on my number and then in my face! I was so ecstatic yes I did cry a little! This was feeling absolutely awesome.. this is what I dream off.. cycling up to the front of the race, this race though! I relaxed and took my thoughts elsewhere and got on with pushing power through the pedals. I was happy to lead until the 45km turnaround into the headwind as my pace felt controlled and uncomfortably comfortably. I was aware I wasn’t pulling away from Ellie and Daniela and to be to be honest this wasn’t what I was trying to achieve (even though I am aware their run legs can take a good 10minutes out of mine). On our way home on the 90.1km out and back course it felt like Daniela put some extra power down. I was happy with this and stuck with the pressure. This was now more than uncomfortably comfortable but I was happy, I relaxed and stayed calm.

We came into T2 and the reception was electric, I looked at Ben and Dad as I ran out of T2 as if to say “what on earth!”. This was now my own race, not worrying about the race around me. This was the first time running the half marathon since August 2016 and I needed the pace to stay consistent to get the best possible run split and ultimately finish the race in the best possible time. 4.10per Km pace was feeling OK off the bike and I held this consistently for 12km. At halfway I was still in 3rd place however it began to drop slightly to 4.15 pace, still content. One lap to go (just over 7km) I was now down in 8th place and after all my efforts it would be disappointing to finish outside the top 10 but this was about me and my running I couldn’t race the other girls I was running at my potential at this time, holding this pace together was going to be close to a PB off the bike.

I crossed the finish line and the pace was 4.20, that for me is a job very well done and very close to PB pace off the bike, a hard bike. To top off my excitement I held onto that 8th position and enjoyed the prize awards later that evening. On stage I received a fantastic IM70.3 Dubai trophy and a warm hug from all the girls finishing in the Top 10, thank you ladies… I am so proud to be racing alongside side you. 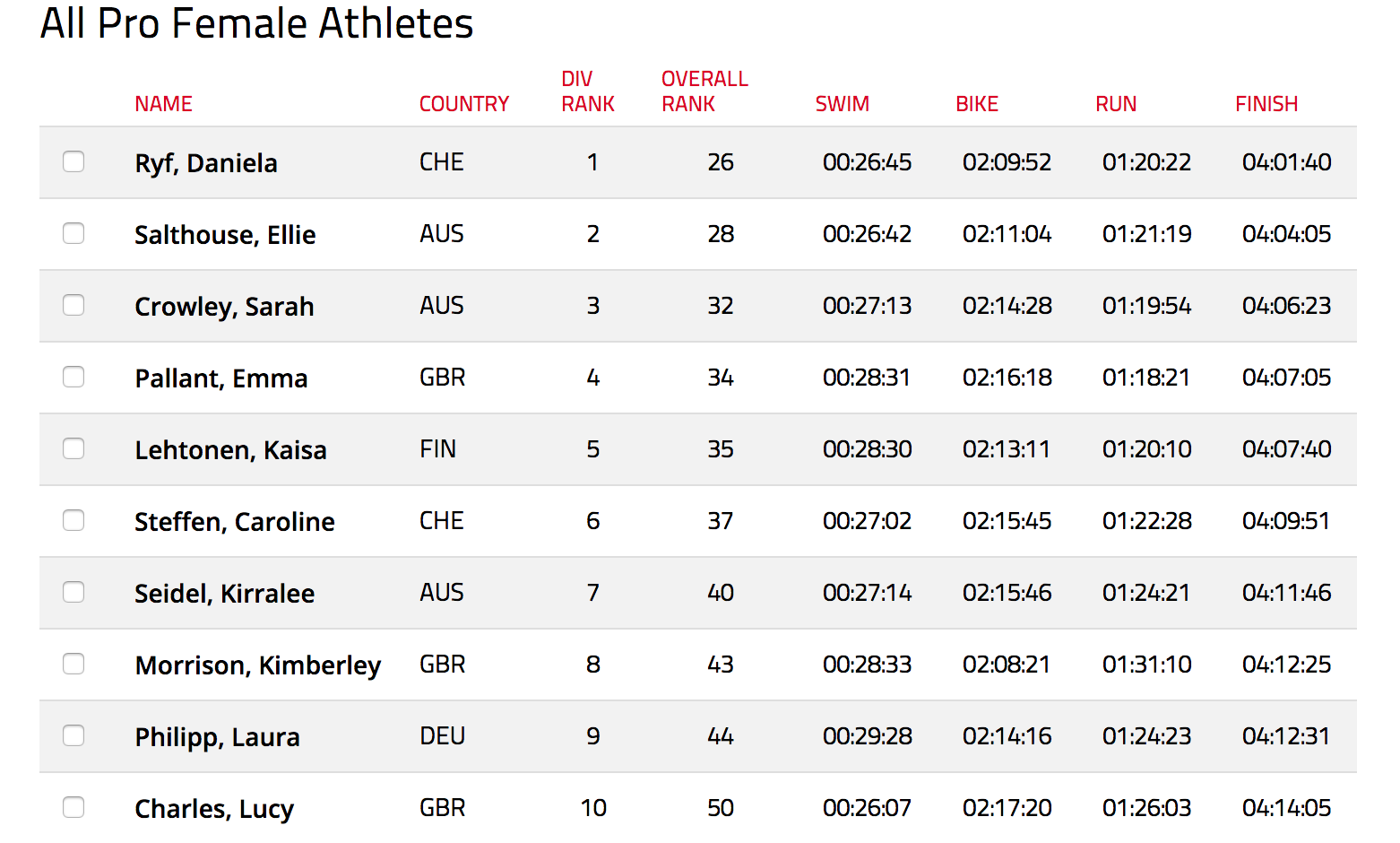 Thank you Jacuzzi for being my Headline Sponsor for 2017. Race Hub, thank you for supporting me with the Giant Trinity Advanced Pro.. it rode beautifully. Endless Pool, Certikin and Torq thank you very much I am absolutely loving the opportunity to race hard and train even harder.

We have now touched down in Hong Kong to spend Chinese New Year with the newlyweds, Tom & Linda. I will then be heading out to Playitas next month to prepare for Ironman70.3 Buenos Aires in early March.

Thank you to friends, family and everyone who follows and supports me.. I appreciate the joy and kind words of encouragement you give to Ben and I, thank you.