Spending one week focused solely on your dream amongst the people who know and, amongst others, are with you all the way is a privilege for anyone right?

Terrified, excited and grateful sum up my first few days…

I stayed in Puerto Del Carmen with my Coach, Perry Agass and TDC athlete Kyle Follett – a stones though away from the Ironman Lanzarote sea swim.

Realisation kicked in and I was out of my comfort zone.. back home I have phenomenal support so my time is spent either in the office or out training. Everything else in-between threw me… I got learning!

Day 1 – an easy run to shake off the 4 hour flight followed by an early evening ‘choppy’ sea swim, great test for my new Helix wetsuit! Day 2 – 75min build run; showing my coach and myself some awesome improvements with the run technique. It was then back to the sea early evening to work on drafting and sighting.

Day 3 – a testing 50km bike with the elements that Lanzarote throw at you. Understatement, I was devastated as that ride confirmed my worry with my weakening cycling performance. I took myself to the beach to rest and reflect waking up 2 hours later with a face full of sand, nice! An easy run followed by a sea swim picked my spirits back up and I was ready for Day 4 – 70km bike with TDC athlete Kyle giving me much greater confidence while we repetitively covered the race route that lied before us… 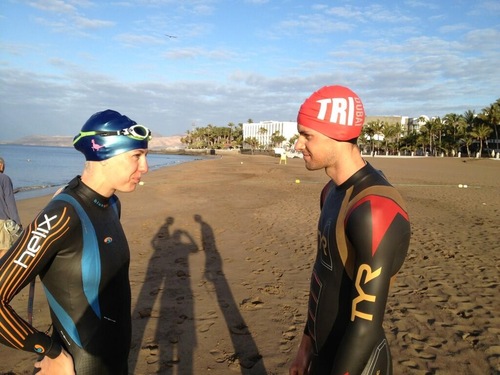 Day 5 – Triathlon! With tension building we set out to sea with a 750m warm up. It was then all or nothing and I led the swim! My gosh I needed an engine on my bike to keep Kyle in sight on first climb (or more aggression!) he is a phenomenal athlete. The pain continued into Day 6 – above race pace intervals… never felt pain like it! Half way through the 10km set my mind said ‘prove to him you have champion potential’ so I dug in and gave it my all. I’m beginning to learn that you need to live with pain and almost enjoy it!?…Work in progress

At this point in the week I decided that my race season would need a descent nutrition plan to achieve Big goals. Watching TDC athlete Kyle Follett I was certain that I should be more vigilant. The book, Racing Weight by Matt Fitzgerald was recommended and thus far I’ve learnt that I need to eat more! That’s great, but more of the good stuff…Work in progress

The day following was a chance to welcome more athletes and recover… There was some clear ambition in the group with some looking to complete the Ironman bike, others just wanting some coaching tips. Best of luck this season all! Oh and Jules, the word average doesn’t suit you!

A relaxed afternoon in the villa and Perry modestly shared with us how he has remarkably defied the odds and achieved ironman success! He is an inspiration to me and I imagine the other athletes and I now know that anything really is possible with a positive and dedicated attitude! 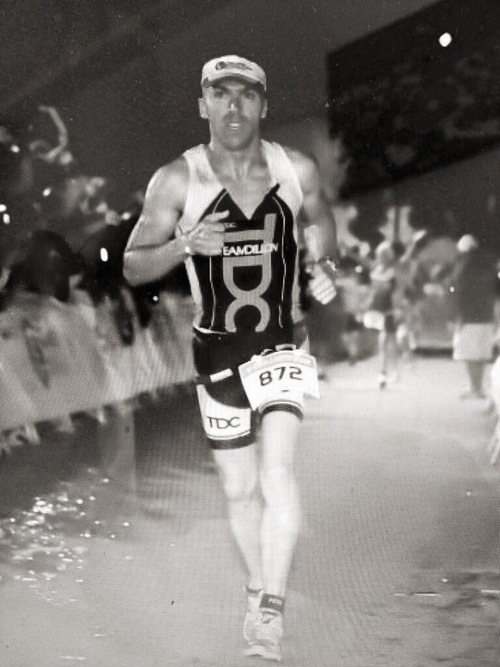 Day 8 – a solid 85km bike followed by a 5km run. I felt strong and was learning to enjoy the challenges of biking in Lanzarote; strong winds, steep climbs. The lava fields really are breathtaking and these pull you through tough times, as well as the Ironman road markings… VIR VIR VIR! The final day I was back on my bike climbing.. Perry was with me all the way on his Scooter! 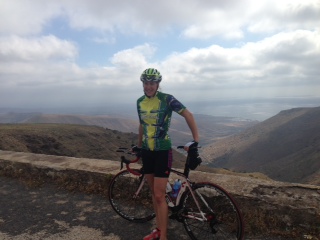 Perhaps a lack of enthusiasm when I reached the top as I knew I had another 45km of biking to get back. However at the top a high5 with Perry said to me ’ believe Kim, you have more in there!’ That afternoon I took myself to the beach for a much deserved Dairy Milk and a refreshing swim to reflect on my week…

So what am I taking away from my intense final preseason training with Team Dillon in Lanzarote;

When you feel like giving up, tell your mind to get over it and push on!

When your body screams out at you, you need to scream back.

Be aggressive! ‘You only get one shot’

Think positive, be dedicated and enjoy the journey…